Improv and Writing: A Parallel Training

I’ve been talking in the voice of a sophisticated Southern belle for about 24 hours. It rendered my husband speechless for hours and annoyed my children to the point of embarrassment within only a few minutes. Last night, I tried it out on stage in my improv class at the stellar Upfront Theatre. 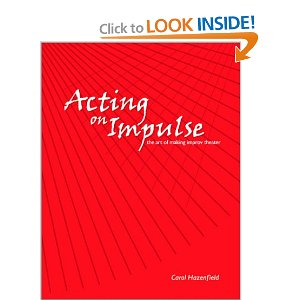 I’ve been reading the book Acting on Impulse by Carol Hazenfield. The latter part of her book emphasizes the deepening of characters and story. I realized that each exercise Hazenfield proposes in her chapter “Playing with Fire: Creating Richer Characters” would also help me create deeper characters in my writing. By inhabiting the character, becoming them, physically, emotionally, and vocally, their thoughts, dialogue, and vocabulary come forward organically. I don’t have to “think” about it, she’s just there. After “becoming” the Southern belle, Sallie Mae, for only a few minutes, my posture, sentence structure, temperament, the speed and harmony of my voice, and even my vocabulary changed instantly. I’ve heard many of my teachers say, “we can act at the top of our intelligence.” I only yesterday realized that my intelligence also included the superficial wisdom of a proud Southern woman who likes to flirt and be pampered. I only needed to let her out.

Perhaps as revenge, my husband has issued me a challenge: to next inhabit a character from Fargo, ND. I’m not sure if his challenge was simply to escape Sallie Mae’s relentless drawl, or to see if she is just a fluke of my imagination, but I’m going to give it a try. Although I’m having a difficult time getting Sallie Mae to leave, I’m looking forward to finding my new friend from North Dakota, and perhaps someday, developing her as a character in a book that I have yet to conceive.

I encourage every writer to “become” their characters for more than a few hours to fully understand their inner workings, their approach to the world, and their motivations within a story’s setting.

Which character are you ready to become?

This entry was posted in improv, Writing and Publishing and tagged acting on impulse, Carol Hazenfield, inhabit your character, lorraine wilde, upfront theatre. Bookmark the permalink.

6 responses to “Improv and Writing: A Parallel Training”