St. Mark’s and The Doge’s Palace

One of the sites in Venice that stuck with me was the Basilica of San Marco (St. Mark’s) and it’s piazza (square). It’s an icon for the city and features embellishments pillaged from other cities. It was the most crowded destination and unfortunately we didn’t make it inside but the exterior was an ornate masterpiece. 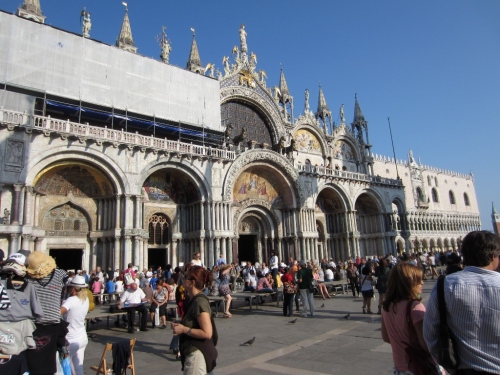 My travel companions stopped to pose for what has become my favorite photo of the trip. Scott, Jenny, Ken, Rupert, and Anthony were a joy to travel with. Thanks to them, I laughed until my stomach hurt every day. They were a considerate and wise bunch and I’m glad I got to share one of the most exciting times of my life with each of them. 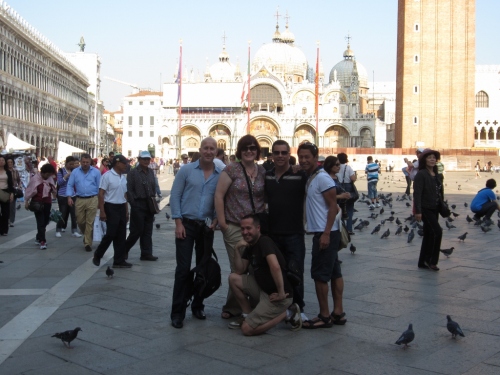 The square was full of pigeons and the tourists enjoyed letting them sit on their arms and feeding them, but we saw them more like rats so we laughed when a tourist was covered in them for photo ops.

The Doge’s Palace, the home of the Doge or supreme authority of the Republic of Venice, was originally constructed in the 1300-1400’s in the gothic style.

In addition to a residence, it also served as a government meeting place for the Republic until Napoleon arrived in 1797.

Photos were not allowed inside the Palace, but this central courtyard gives you an idea of our ornate and grand the decor was. I’ve never seen more life-size statues.

Some part of most major sites in Venice are in the process of restoration or maintenance. The scale and difficulty are shown in this photo of scaffolding around just one peak of the building. If you look close, you can see a person on the scaffolding. Whenever I visited a site like this palace, I tried to imagine the Venetians physically constructing it without cranes, electricity, or any modern invention. The sheer number of humans and time invested must have been staggering.

The palace also originally contained the court and prison of Venice and once housed the infamous Casanova. Later a prison was constructed  next to the palace and was connected by the Bridge of Sighs, named by Lord Byron because the bridge offered prisoners their last view of Venice, and their last sigh at its beauty, before descending into their imprisonment.

Anthony waves to me while my other companions take in the prisoners final view of Venice, the view shown below.

This view from the Bridge of Sighs includes a peak at the island of San Giorgio Maggiore and its church dedicated to St. George, shown below, and now housing a famous library and art gallery.

We didn’t make it out to this island, but it’s just one of many attractions on my list of excuses to return to Venice someday.

2 responses to “St. Mark’s and The Doge’s Palace”